With success! In no time the game became a tremendous hit. First in America. The rest of the Western world followed soon. Resulting in the twenties in millions of sets ‘Made in China’. 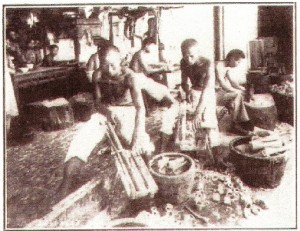 Whole villages were engaged in the assembling of rose wood boxes with brass trimmings, the manufacture and engraving of bone-and-bamboo 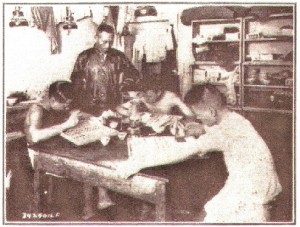 tiles, the making of counters, dice, cricket boxes and Ming cylinders. At the time, even English rule booklets were printed in China. Sometimes those sets had no brand. Sometimes they were ordered and branded by western importers like The Mah Jongg Sales Company of America who put their own Babcock logo on the boxes.
Depending on the quality of the boxes and the tiles, prices differed a lot.


Some sets might cost $200. A lot of money in those days. America and Europe of course entered the Mah Jongg market too and came with their own sets in a broad price range. With tiles made of a variety of materials. Often in good looking, well made boxes. And, since the brand name ‘Mah-Jongg’ was patented, all kinds of fantasy names were thought up.

But however inventive the design of the Western sets were, they lacked the appeal of the authentic Chinese sets from the twenties.