Mah Jongg might well be the game that is the most burdened by myths and fables. All of those are pure humbug. Just sweet sales talk to impress the, largely female, customers during the Mah Jongg craze of the roaring twenties.

The truth is that the origin of the game did not get lost in the mists of time. It has no link to Confucius either. Nor was it played exclusively at the court of the Chinese emperors. Unlike chess, the game of goose, card games, the African Mankala (known by many other names), Mah Jongg is a relatively ‘young’ game originating from the end of the nineteenth century. It was mentioned for the first time in 1893 by two different sources.

One of the possible roots of Mah Jongg might be the sets of cards of bamboo or paper strips with the elongated measurements still used for Chinese playing cards. However, very little is known about the evolution from bamboo strips to the early and current bone-and-bamboo tiles.

I believe that Mah Jongg, like the Indonesian rice table, has been made up for the mainly American expats in China. The similarity with Gin Rummy can not be accidental.
Years later Mah Jongg was ‘recaptured’ by the Chinese who have become fanatic players sometimes gambling away enormous sums of money. They tend to play with big and ugly, but practical hard plastic tiles.
The man who brought Mah Jongg to America.

In September 1920 Joseph Parker Babcock published his ‘The Red Book of Mah-Jongg’. For many still the bible of the game. 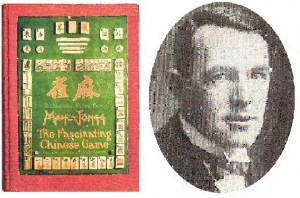 Stationed in China for Standard Oil, Babcock learned about the game, simplified the rules, trade marked the name Mah-Jongg and imported sets in America.